Also two other EuroEliters with different partners had a DERBY BATTLE in the Doubles final!

At his FIRST ITF EVENT and with the help of a WildCard Main from SJTC-EuroElite, Anton Stendal(VFTK2003/EuroElite) he got his first ITF singles points and that was super… but he NOW HAS HIS FIRST ITF DOUBLES TITLE TOO!!… Simply Amazing but there is more-… his opponent was 7-year EuroEliter Oskar Broström Poulsen(Den2002-Gentofte TK/EE) with his partner and it came down to a close Match Tiebreak.

WOW… what super events in Waiblingen, Germany (unseeded Adrian Luddeckens winning the Title Category 2 Tennis Europe 16s event), Mauritius where 2 players got their first points and now Kramfors where we have our  Touring Team EuroElite/HEAD and we had 3 total in the finals and 4 players GETTING FIRST ITF POINTS! 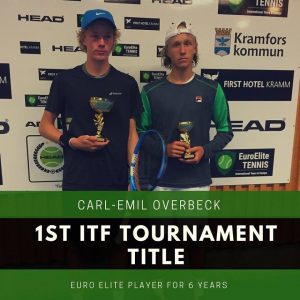